Over the next twenty years, San Mateo County periodically conducted RFP processes to award the county contract for emergency ambulance service. As a result of these competitive processes the EMS system has continued to improve its service to the community and has become a leader in California EMS. The most recent RFP process was conducted in 2009 with the contract awarded to American Medical Response, the incumbent provider. However the services are provided in a public/private partnership model that includes both paramedic emergency ambulance service and paramedic first response. This collaborative arrangement has received a number of awards from the National Council for Public-Private Partnerships, International City-County Management Award for Outstanding Partnerships, the League of Cities Helen Putnam Award for Excellence in Public Safety, and the International Association of Fire Chiefs.
Some of the key features of the current San Mateo County EMS system include:

The County establishes maximum emergency ambulance user fees within the contract for services. User fees financially support the service (both ambulance provider and fire service first response); there is no county subsidy.

As a result of a four year planning process and recent Request for Proposal Process, on January 1, 1999, a new system for providing emergency medical responses went into effect. Firefighter paramedics on fire engines and the American Medical Response (AMR) ambulances respond to 9-1-1 emergency medical calls. The system is a public/private partnership between AMR, the fire service agencies in San Mateo County, and the County Health Services Department’s EMS office. AMR contracts with a Joint Powers Authority, made up of 17 fire service agencies, to provide paramedic first responder services. 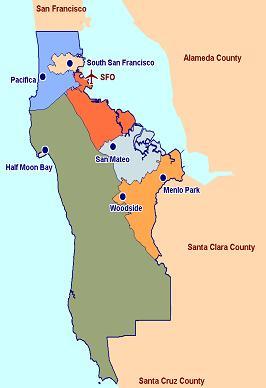 The system benefits patients with a faster paramedic response than the previous model and better integrates the care provided by firefighters and ambulance paramedics. A single dispatch center, San Mateo County’s Public Safety Communications in Redwood City, performs all dispatch services for fire departments within the County as well as for the emergency ambulances. The system dispatches the closest fire engine and ambulance to every medical incident regardless of local fire agency boundaries.

Oversight of the system, both operational and medical, is provided by the EMS office of county Health Services, which holds the master contract with AMR West for both ambulance service and paramedic first response.

This bold approach of merging public and private services, with the County as the oversight agency, required a high degree of planning and cooperation. It is the result of a four-year planning process that involved medical professionals, city managers, fire agencies, ambulance providers, consumers and county staff.